For years I have wanted to attend a Cirque Du Soleil show. The mystique and talent has always amazed me and was so excited to finally attend a show!

The show starts on time, so be a little early to get snack and such and find your seats. As soon as the show started I was drawn in by all the magic going on before me. I was prepared for an amazing show and they did not disappoint. The performers were so engaged in their characters and really took all of us into a journey. We may not have understood where they were taking us, but we were along for the ride. There was so much talent on that stage, I kept thinking about how long they must rehearse this show before they decide to take it on the road. The stunts are out of this world and really leave you wondering, "How can they do that? Is that even humanly possible?" There was this amazing performance of a woman on silks and it literally took my breath away. And, there is a live band on stage performing during most of the show. It took me half of the show to realize that it wasn't a track playing through the sound system, there was an actual band and wicked awesome singers!

There is still time to use the coupon code because the show is here until July 7th. GO! Make it a date night, grab the girls for a night on the town, whatever, just make sure you make it out to Time Warner Cable Arena and witness it for yourself. It's amazing! 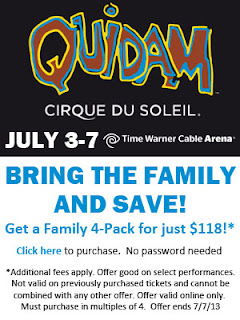 I've been asked what age I recommend this show for and I will be honest, always am. I had looked up previews of the show on YouTube and made the executive decision to leave my son (he's 7) at home and make it a date night. I'm glad that I did. Some of the characters are really dark and creepy and the storyline was hard to follow for me as an adult, so I'm sure a child would have been bored. I would recommend this maybe to the preteen crowd and up. Younger children would be amazed by the acrobats and such but it's definitely more of an adult show.

I received complimentary tickets from Feld Entertainment for me to attend this event. Any opinions expressed are mine and my families, but we're sure you'll agree.
Labels: charlotte cirque du soleil event quidam time warner cable arena